The 2019 European apple and pear crop forecast estimates that most European countries are expecting a rather low apple and pear crop for the coming season. On 8 August 2019, close to 300 representatives of the international apple and pear sector met at the Prognosfruit Conference in Alden Biesen, Belgium. During the conference, the 2019 European apple and pear crop estimate was released. This year, the apple production in the EU is set at 10.5 million T as a result of climatic events and the alternation of last year’s bumper crop. This is a decrease of 20 % compared to last year’s record high crop and of 8 % compared to the average crop of the three previous years. The pear crop is predicted at 2 million T, a decrease of 14 % compared to 2018. Nevertheless, comparisons with previous years need to be handled with much caution, given last two years’ exceptional variation.

Apart from crop alternation after a bumper, this year’s crop estimation has been influenced by several factors, including in particular a mild winter, a cold and wet May, late frost, a sunny and warm June, heat wave and drought in July, abrupt changes in temperature, and low blossoming. However, these events were scattered, and their impact differs significantly between regions. Additionally, for pear, the overall low figure is mainly due to a decrease in estimation of Italian pears which caused the overall forecast to be the second lowest of the decade. The drop was mainly the result of low blossoming, influenced by the high crop, heat of last season and rain.

A general comment for apple is that the crop in the Eastern part of the EU has been affected by the cold snap in May, with losses of 44 % of last year’s record high in Poland. In most apple producing countries, however, there were moderate decreases or stabilisation of the crop. France, Spain and Portugal are recording an increase of their crop. In terms of quality, there might be issues with sunburn and sizing. For pear, there are estimations of moderate to more serious decreases in all major pear producing countries, except for a small increase in Spain. Overall, there are still overhanging stocks on the market, but the late start of the season by up to two weeks might contribute to a better balance of the market.

The crop estimation needs to be held against a complex market situation, given the ongoing consequences of an increasingly more challenging global trading environment. Therefore, efforts to boost consumption need to be continued. WAPA will continue to monitor the developments of the Northern Hemisphere crop and will issue updates when appropriate. 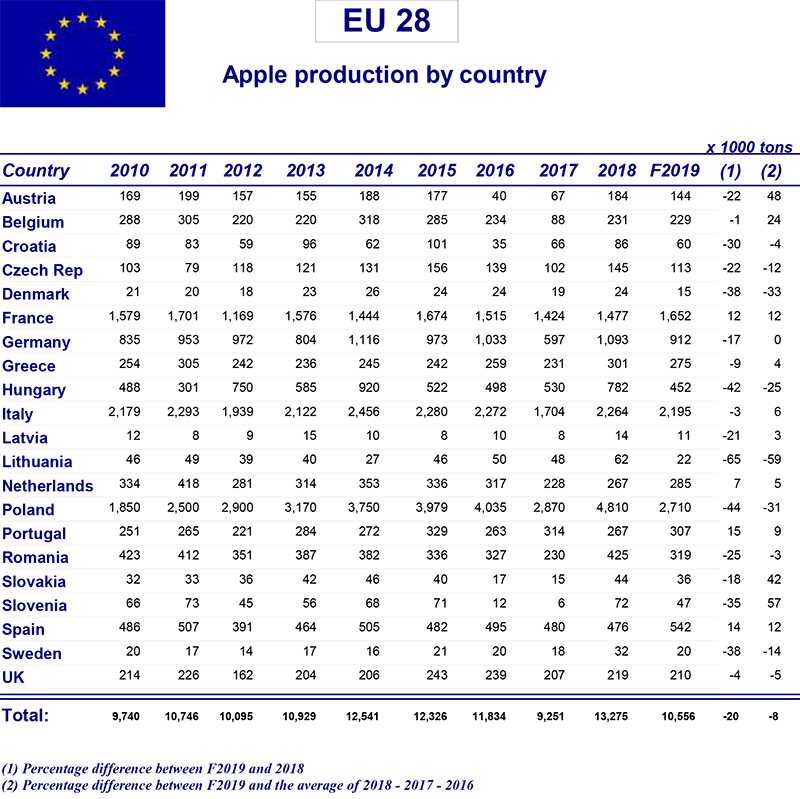 Orange supply may increase in the Brazilian market