There is a saying among those who have been in the industry for a long time: “there is no harvest like the other”. The current one is overcoming itself; such are the difficulties faced.

The first signs that the season would be different were given by last year’s bloom. Blooming in August and September 2019 was very good. However, a period with no rain in the following months accompanied by intense heat has caused an expressive fruitlet fall. The fruits developed until a 2-3 cm diameter size but were overturned by excessive heat. Rains came up in the end of October and a new flowering is expected.

The harvest season was preceded by the arrival of the COVID-19 pandemic. The great demand for labor, much of it coming from northeastern states in the country, concerned everyone and made us take extraordinary care to preserve the health of workers involved in the harvest and of other collaborators from other sectors of the properties.

Thus, the current harvest has been one of great surprises and has presented unusual challenges to citrus growers of the Brazilian citrus belt. The main consequences are presented below.

The period without rain, from May of this year until this last month of October, was one of the most extensive ever recorded in the state of São Paulo, according to the graphs and tables below. In addition to drought, very high maximum temperatures were recorded, even at night, causing considerable weight loss and lower fruit quality. The water deficit was very significant in all regions. This is the main reason for the significant decrease in the volume of fruit produced in the “citrus belt”. The losses are more accentuated in the north of the state of São Paulo and in the Triângulo Mineiro, warmer and drier regions.

What can we expect from the next crop?

The northernmost regions only flourished after the rains that fell in the last days of October. This late blooming should not have a good fruit set because they will be still small in the higher summer temperatures. Moreover, the loss of leaves was very great in the recent drought period, and this will not allow for a large amount of fruit for the next season, since the plant will not be able to provide the metabolites necessary for an expressive fruit set. A good 21/22 harvest is not to be expected for these regions.

In the most southern regions, which suffered less from water deficit, the flowering came in the normal period, between August and September. However, irregular rainfall and high winter temperatures (table 2), after flowering, have worried producers. What they see in their orchards does not indicate a good harvest for the second year in a row. My experience shows that the harvest after a year as irregular as this one is also not usually good. 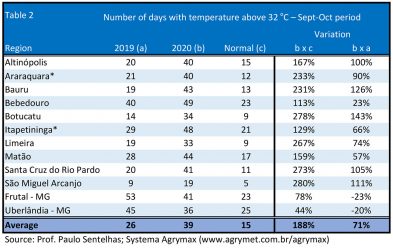 Price of juice should go up

Although it is common for citrus to have alternate crops, i.e., smaller crops followed by larger crops, the climatic factors presented in this article should result in two “small” crops in a row, the current and the next seasons.

Thus, Brazilian orange juice industries should process fewer oranges for two consecutive years. This reduction in supply, combined with the growing demand for juices in times of pandemic, should cause increases in the price of juices on the international market.

Mauricio Mendes is a citrus consultant sine 1980 and Citrus grower since 1988. Has worked to major Citrus Farms in Brazil. Is COO of a 6.000 ha Citrus Farms operation in the SW od Sao Paulo State. Mauricio is also Beachead Advisor for New Zealand Trade and Enterprise (NZTE) . Also has been partner and CEO, for 14 years, of Informa FNP which is one of the most important Agribusiness consultant company in Brazil. FNP was recently acquired by IHS Markit.
Mauricio is also member of GCONCI (Citrus Farming Consultants Group) which gathers 17 Consultants. GCONCI provide direct technical assistance to over 40 million citrus plants (25 % of the Brazilian Citrus Belt)