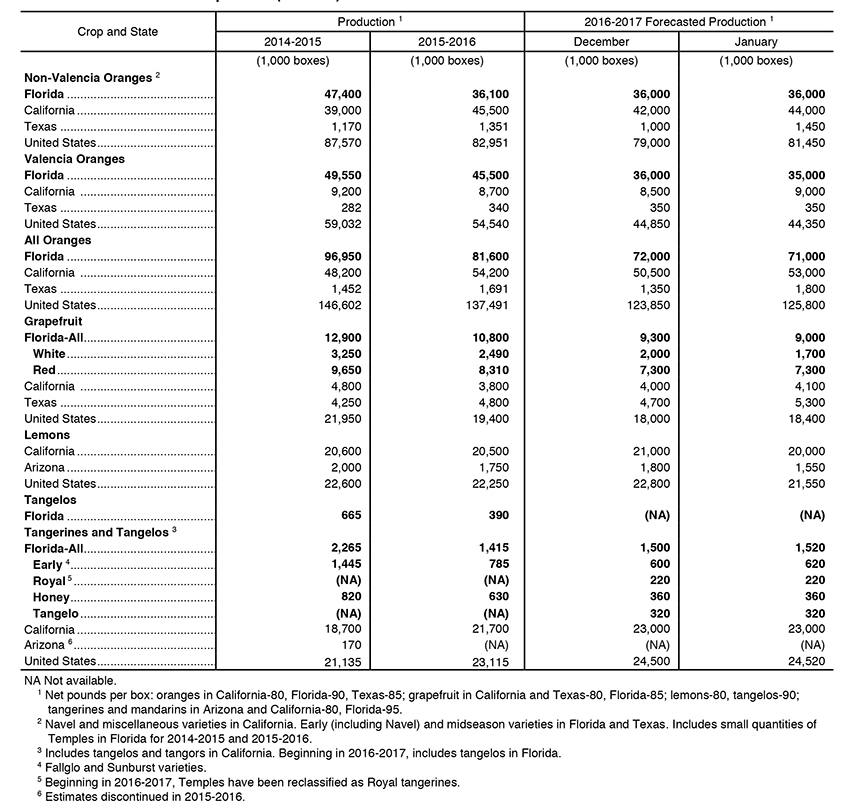 The 2016-2017 Florida all orange forecast released today by the USDA Agricultural Statistics Board is 71.0 million boxes, down 1.00 million boxes from December, and 13 percent less than last season’s production. The forecast consists of 36.0 million boxes of the non-Valencia oranges (early, midseason, and Navel varieties) and 35.0 million boxes of the Valencia oranges. Regression data used are from the 2006-2007 through 2015-2016 seasons. For those previous 10 seasons, the January forecast has deviated from final production by an average of 5 percent, with 6 seasons above and 4 below, and with differences ranging from 15 percent below to 10 percent above. All references to “average”, “minimum”, and “maximum” refer to the previous 10 seasons unless noted.

The forecast of non-Valencia production is unchanged at 36.0 million boxes. Estimated utilization through December, including an allocation for non-certified fruit, is 12.0 million boxes, compared to 13.9 million boxes last season. Final fruit size is below the minimum, requiring 317 pieces of fruit to fill a 90-pound box. Final droppage at 26 percent is above average but below last season’s record of 32 percent. The Navel forecast, included in the non-Valencia forecast, is lowered 100,000 boxes to 900,000 boxes.

The forecast of tangelo production is unchanged at 320,000 boxes. The Row Count survey conducted December 27-28, 2016, showed 41 percent of the tangelo rows were harvested. Harvest of the Orlando variety is almost complete for the season with the Minneola variety remaining.

Brazilian orange juice: Juice exports rise at the beginning of the season

Brazilian orange juice: Stocks end 2021/22 season at low levels and are not expected to increase in 2022/23