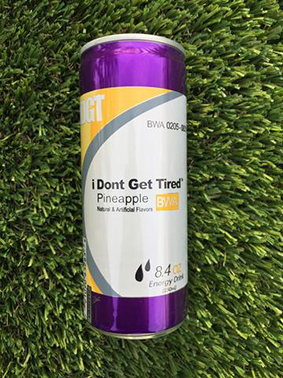 Multi-Platinum recording artist Kevin Gates has unveiled a new flavor of his highly successful energy drink, I Don’t Get Tired (#iDGT) Pineapple. The new pineapple flavor – which was developed by Gates himself – has been shipped to distributors and will be available in select stores in the coming weeks.

The Bread Winners’ Association MC entered into the beverage business in 2014 when he first launched the I Don’t Get Tired (#iDGT) energy drink. The drinks are sold to his core audience at Gates’ headline shows, including throughout his highly successful two-part ISLAH TOUR, which celebrated his debut album and sold out every date across North America. The drinks are also sold worldwide online at iDontGetTired.com and have been distributed to locations in the cities including Baton Rouge, New Orleans, Los Angeles, Atlanta, Washington DC, Baltimore, Las Vegas and more.

The name of the energy drink coincides with one of Gates’ Platinum-certified singles, “I Don’t Get Tired (#IDGT) Ft. August Alsina,” which has become an anthem for the #IDGT viral campaign and social media movement. Gates’ use of the phrase, “I Don’t Get Tired,” represents his overall attitude as a rapper, businessman and parent with a relentless hardworking attitude. The #IDGT hashtag has been used over 1.2 million times on Instagram alone, with countless placements on other social media platforms. Countless fans even tattooed #iDGT on them. Gates – who now has over 10 million followers across his social media platforms – released a companion video for the anthem, which surpassed 2.5 million views in less than one month and now has over 40 million views.

Gates has become one of the most critically acclaimed artists in the hip-hop genre over the past several years by releasing an extremely successful set of highly-regarded mixtapes. The MC solidified himself as one of the biggest rising stars across all music genres when he released his highly anticipated debut album “ISLAH” in January 2016. Gates made an incredible chart debut, entering Billboard’s “Top Rap Albums” chart at #1 while also coming in at #2 on the overall Billboard 200 chart with first-week sales in excess of 112,000. The album has continued to be one of the highest-selling albums of 2016, and went on to claim the stake as the year’s only debut album to achieve RIAA Platinum certification for sales in excess of 1 million.