Artificial Intelligence – the solution to food waste at home.

Developers of the EatBy App have incorporated artificial intelligence into their kitchen management and grocery list app to reduce domestic food waste. 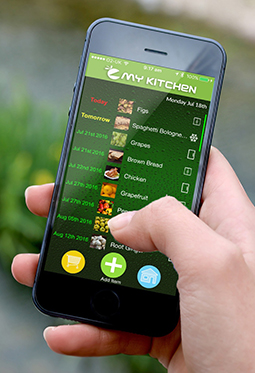 Developers of the EatBy App have incorporated artificial intelligence into their kitchen management and grocery list app to reduce domestic food waste.

The latest release of the EatBy App includes a new feature – it automatically suggests how long fruit, veg and frozen items will stay fresh for and then reminds you to use them up before they go off. But the clever bit, according to the developers, is that the app learns the storage habits of individual users.

"Not everyone's kitchen is the same, and different food storage environments effect shelf life. EatBy App addresses this problem by learning as it's used over time."

Domestic food waste is now the biggest contributor to the global food waste problem. Supermarkets have suffered the brunt of bad publicity, being blamed for massive quantities of unsold food being wasted. Many supermarkets and grocery stores have since made big changes that reduce food waste in the supply chain. However, the problem of food wasted at home is still massive. The Eatby developers believe change has to happen in our homes and  stress that we all need to review our grocery shopping and food consumption habits. In some cases households unnecessarily waste up to 30% of their food simply from poor kitchen management. This not only has a detrimental environmental impact, it also has a big impact on householders' wallets. With the escalation of food prices, especially in the UK, where the British Pound has slumped as a reaction of Brexit, careful food management is becoming more important. EatBy App is the leading smart kitchen technology and its development team are one of only a few to come up with a successful domestic food waste reduction solution. There are a number of apps designed to share unwanted food but EatBy App prevents the accumulation of unwanted food in the first place.

Initial versions of the app were praised by users and the press despite the user interface being described as "clumpy". But subsequent versions of the app have addressed this by incorporating a much more intuitive and attractive interface. The development team have certainly listened to their feedback to refine the app.

Designers at EatBy say they are now developing the app to make the best use of the freezer in an effort to make users more aware of the benefits of freezing food to further reduce food waste. But the latest big news is that EatBy are developing Smart Kitchen hardware. "The products we're working on will make kitchen management simple – with a big focus on beautiful design and developing A.I. driven 'invisible technology' that works in the background with minimal user effort required." Steffan Lewis, co-founder of EatBy App went on to say, "Artificial Intelligence does not need to be scary – in EatBy's case it'll simply help make life better. Our technology is aimed at families, foodies and people who love to cook. We're not interested in creating futuristic, sterile kitchens. We are interested in encouraging everyone to eat delicious fresh food, reduce food waste and save money."

EatBy App is available on the App Store and Google play. Information can be found at www.eatbyapp.com