The World Is Given An Energy Boost Amidst Growing Health Concerns 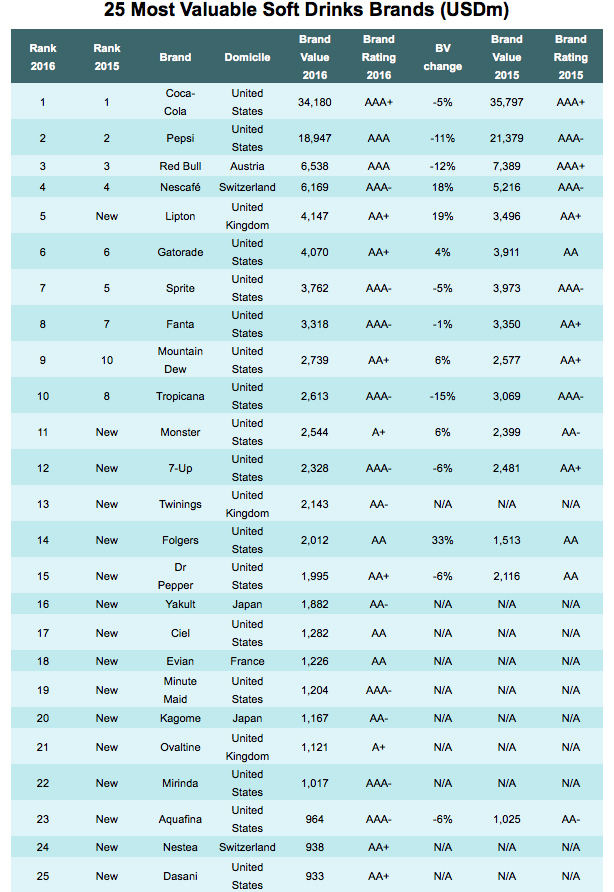 Every year, leading branded business valuation and strategy consultancy Brand Finance puts thousands of the world’s top brands to the test. They are evaluated to determine which are the most powerful and the most valuable by country, by industry and against all other brands worldwide. The most valuable soft drinks brands can be found in the Brand Finance Soft Drinks 25.

The global soft drinks industry is undergoing a transformation. Consumers are becoming increasingly aware of the negative health implications of consuming sugarised, carbonated drinks. This has led to a slowdown in growth in developed markets. Moreover, sensitivity to health and wellness factors such as sugar content was the major contributor to poor performance of soft drinks in 2015. The table accurately represents this trend as more brands have fallen in value than risen this year.

The total sum of the 25 most valuable soft drinks brands is US$109.2 billion, of which US$83.9 billion is from the 16 United States brands, making the US the country with the most brands in the table. Coca-Cola is by far the world’s most valuable soft drinks brand, with a value of US$34.2 billion despite falling 5 % this year. In response to growing health concerns, Coca-Cola launched Coca-Cola Life, however, it was criticised for being a ‘gimmick’ that did not properly promote healthy consumption. Pepsi is in second place with a value of US$18.9 billion, also after a decrease in value. Red Bull, ranked third, follows suit, dropping 12 % this year to a value of US$6.5 billion. Nevertheless, it is commendable that these soft drink giants have held their positions at the top of the table despite the losses in value.

Mountain Dew’s brand value rose 6 % to a value of US$2.7 billion, clearly indicating that the brand has not conformed to the current global trend. Whilst consumers may steer clear of carbonated drinks, Mountain Dew has evidently managed to project itself as a worthy purchase despite being carbonated. This is largely due to the fact that the brand has embraced the idea of being an energy drink, thus making the drink appealing to those who want an energy boost. As a result, Mountain Dew is fortunate enough not to be subject to health-driven ideologies as much as other carbonated drink brands have been, as the energy drink aspect may alter the consumer’s perspective on the drink’s carbonation. Furthermore, Mountain Dew’s strong presence in the gaming culture has allowed the brand to further distance itself from the functional norms of a carbonated drink. It partnered with PlayStation in an agreement which allows players to redeem rewards in the PlayStation Store from bottles of Mountain Dew, further amplifying Mountain Dew’s image as a sports drink, albeit in a virtual sense.

Monster follows suit, rising 6 % to a brand value of US$2.5 billion. Monster’s sales grew as the company reached new markets following a partnership agreement with Coca-Cola. The brand’s drinks are similar to Mountain Dew in the fact that they are both carbonated yet projected more as an energy drink. Whilst the energy drinks industry is reaching maturity, it is still the fastest growing among carbonates. Carbonated drinks that want to effectively compete should follow in Mountain Dew and Monster’s footsteps and expand the scope of their product.

Firmenich announces dragon fruit as 2023 flavour of the year