Kvass, traditional to markets such as Russia, Ukraine, Belarus and the Baltic States, accounts for… 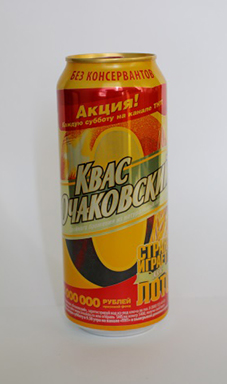 Kvass, traditional to markets such as Russia, Ukraine, Belarus and the Baltic States, accounts for 6 % of the East European carbonates market, and has evolved over the years, according to consumer insight company Canadean.

The company’s report states that there are two distinct types of kvass, with overall volumes of around one billion liters in East Europe. Traditionally, kvass was made at home by fermenting bread with water and sugar to produce a naturally fizzy, mild-tasting drink with a malt/cereal flavor.

Naturally-brewed kvass is typically produced by brewers and consumed as a non-alcoholic alternative to beer. Old-style fermented bulk/barrel kvass made from bread waste or malted cereal is still often dispensed in barrels in the street during April to September, and has a shelf-life of 1-2 days.

Antonella Reda, Product Development Manager at Canadean, explains: “Rich in B vitamins and containing beneficial bacteria due to its fermentation, kvass is still widely consumed in countries such as Russia not only for its thirst-quenching properties, but for its healthy digestive benefits.”

The kvass market was revolutionized by the brewer Ochakovo in 2001 with the launch of the first premium-priced kvass product under its Ochakovskiy brand. This product had a long shelf life of 3 – 6 months and was packed in 150 cl PET. Many local brewers and multinational soft drinks producers, such as Coca-Cola and PepsiCo, followed suit, while multinational brewers, such as Heineken and Carlsberg, also include kvass in their portfolios by virtue of their acquisition activities and local market focus.

Flavored kvass drinks, under legislation specifically in Russia and Belarus, must be labelled as ‘kvass-flavored’ to differentiate them from the naturally brewed product. Flavored kvass sales have, however, been consistently falling since reaching a peak of 622 million liters in 2007 in East Europe.

Reda continues: “Fermented kvass has benefited from consumer preference shifting towards naturally-derived and perceived healthier, less artificially-processed beverages. However, with Russia being the key consumption market in East Europe, overall kvass volumes contracted in 2015 as consumers cut back on their spending in a climate of recession.”

Interestingly, in China, where the probiotic benefits of fermentation have long been understood, two companies launched kvass with some success in 2013, namely Hangzhou Wahaha Group and Harbin Qinlin Libaosi Food Co. While Wahaha’s volumes have contracted after shifting focus to its core categories, Qinlin and smaller companies showed robust growth in 2015.