Newly published New Zealand research is creating waves internationally by illustrating that the New Zealand-bred Blackadder blackcurrant variety not only increased reaction time while maintaining accuracy, but has the potential to help maintain brain health during natural ageing. 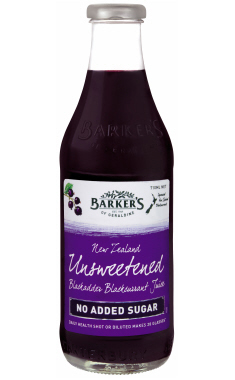 Blackcurrants have been known as a superfood with benefits for centuries. For generations, mothers have regarded blackcurrants as a trusted natural source of nourishment for their families and traditional healers used them for a broad range of ailments and winter malady’s. But it’s only in recent decades that scientists have caught up and begun to seriously investigate the healing and protective powers of this remarkable humble fruit.

The research is the first to look at the effects of berry consumption on the cognitive performance of healthy young adults. Their previous research has suggested that compounds found in certain berry fruits may act like monoamine oxidase inhibitors, similar to a class of pharmaceuticals commonly used in the treatment of both mood disorders and neurodegenerative diseases like Parkinson’s.

This research suggests that when a daily dose of 140 ml of New Zealand-grown BLACKADDER blackcurrant juice was taken, the mental performance indicator of reaction time improved, and the activity of monoamine oxidases (MAO’s) was reduced.

Plant & Food Research scientists were specifically looking for things that inhibit MAO’s which are enzymes that break down important neurotransmitters such as serotonin, dopamine and noradrenalin, and create hydrogen peroxide which are bad for your brain.

Neurotransmitters are chemicals released by our brain that send specific messages that influence our brain and/or our body. Serotonin, norepinephrine, and dopamine exert great influence over our impulse control, mood, appetite, cravings, anxiety, motivation, focus, pleasure and ability to emotionally manage stress. Dopamine is also involved in quick, well-coordinated movement. Conditions such as Parkinson’s has been attributed to low dopamine levels, and depression and other mood disorders to low serotonin. Additionally, as we age, we produce less transmitters and produce more MAO’s.

The potential benefits of the research are significant. If the enzyme, MAO, can be inhibited then it may ensure higher levels of neurotransmitters, which could benefit those that do not have enough. The suggestion that a commonly consumed fruit could potentially help maintain brain health during natural ageing is potentially ground-breaking.

These findings have been published in scientific papers and further research exploring the blackcurrant’s potential role in brain health is expected from the researchers soon.

Blackadder variety now widely available as Barker’s blackcurrant juice
The BLACKADDER blackcurrant, nicknamed “Neuroberry”, has not been widely available, until now.  However, Barker’s of Geraldine, which has been locally processing and preserving New Zealand fruits for 47 years has been working to bring a healthful juice, containing the new cultivar, to market.

And, in June, with support from its local Blackcurrant growers, Barker’s has re-launched its Unsweetened Blackcurrant juice, reformulated to feature 100 % New Zealand grown BLACKADDER.

The new juice, which is packed with over 950 squeezed BLACKADDER blackcurrants in every bottle and 3 times the daily requirements of vitamin C per 200 ml serve, can now be found on supermarket shelves throughout the country.

Nutritionist, Sheena Hendon says that health professionals have recognised the nutritional benefits of blackcurrants for a while now.

“It is fantastic that the BLACKADDER variety is available to everyone all year round, in this natural, unsweetened form and at a reasonable price. I will be recommending clients that may benefit healthwise to take the juice regularly.”

Michael Barker, says Barker’s of Geraldine is proud to continue working with NZ scientists and blackcurrant growers to support the health and wellness of Kiwis.

Promising results in fight against dyslipidemia

How cranberries could improve memory and ward off dementia

Plastic-eating enzyme could eliminate billions of tons of landfill waste