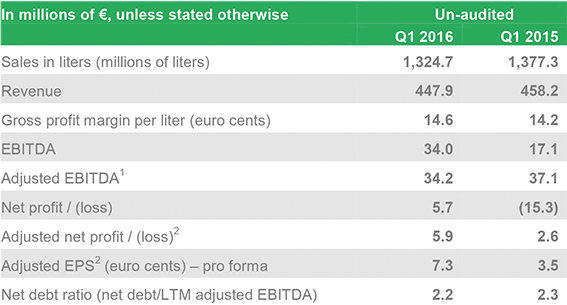 "Our strategic focus to grow Co-Packing relative to Private Label is paying off and I am pleased that this quarter we reported double digit growth in this category. The development of Private Label unfortunately did not meet expectations with volumes declining, partly due to very soft sales in the Easter period. Another important factor impacting Private Label volumes compared to last year was our commercial decision to let go of some of the lower margin private label contracts in water and CSD, specifically in Germany and Poland. This benefits our gross profit margin per liter but also impacts overall volumes. Going forward we must manage this balance carefully to ensure continued volume and bottom line growth.

"Despite the challenging conditions in the first quarter we were able to report an increase in net profit thanks to the refinancing in June 2015 and no negative impact of exceptional items.

"We confirm our mid-term guidance of low to mid-single digit organic volume growth. For 2016 we expect the organic growth to be closer to the lower end of this range while we expect gross profit margin per liter to remain flat compared to 2015.

"During Q1 we announced the first acquisitions since our IPO and yesterday we closed the DIS transaction. We remain focused on our buy and build strategy and continue to work with a well-filled pipeline of M&A opportunities. I am looking forward to our first AGM today during which we will propose the appointment of new supervisory board member Inge Plochaet."