SkyPeople Fruit Juice, Inc., a producer of fruit juice concentrates, fruit juice beverages and other fruit-related products, announced that on… 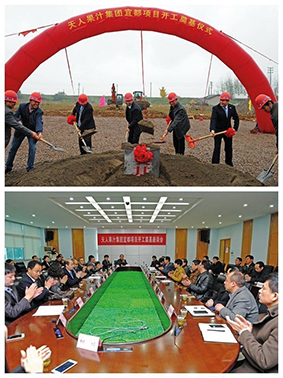 "We are excited to break ground on what is planned to be a state-of-the art operation for the comprehensive processing of oranges," said SkyPeople Chairman and CEO Yongke Xue. "The manufacturing facilities will incorporate advanced international processing technology which will create value-added in the production of a wide range of high margin orange products."

"Upon completion in 2017, the new facilities will become another major production base for SkyPeople in addition to those that the company currently has in Northeast China and Shaanxi Province. We are pleased to partner with the Yidu municipal government in this opportunity to create exceptional products for both domestic and international distribution as well as to further bolster the region's strong agricultural industrial zone known for its abundant orange production," concluded CEO Xue.

As previously announced, the total investment in the Yidu orange project will be approximately RMB 300 million ($48 million), which includes fixed assets and the purchase of land use rights. Pursuant to the Investment/Service Agreement entered into by the Company's subsidiary, SkyPeople Juice Group Co., Ltd. and the Yidu Municipal Government in Hubei Province, China, the project will be built on a parcel of land approximately 280 mu (46 acres) located in the city of Yidu, Hubei Province. The Company will develop a concentrated orange juice production line and other facilities, such as storage facilities, a sales and distribution center, and an R&D center. The Yidu Municipal People's Government will be responsible for the basic infrastructure surrounding the project land, such as the main water supply, main water drainage, main roads, natural gas provision and the communications network. Yidu Municipal People's Government completed the demolition of the buildings on the project's land.

The Company located its orange project in Yidu, Hubei Province, consistent with the its strategy to locate its manufacturing facilities near major fruit growing centers. Further, in this project as well as the kiwi project in Mei County, it is executing its strategy to vertically integrate its operations to ensure a steady supply of fresh fruit.

Hubei Province is one of the biggest citrus production provinces in China, with the city of Yidu also known as the "town of citrus."