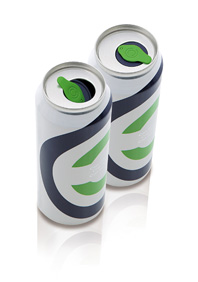 can2close has been recognized with an award at the Munich Business Plan Competition (Münchener Business Plan Wettbewerb Step 1). The competition was hosted by evobis, an organization with close ties to German businesses that supports and awards innovative business ideas of startup companies. Held once a year, the competition consists of 3 steps, each one a competition of its own. On March 5th, 2013, evobis hosted the award ceremony for Step 1 in downtown Munich’s HVB Forum. Jurors selected can2close as one of 10 winners out of 169 submissions.

Munich-based can2close GmbH, founded in 2012 by Andreas Kleiner, Robert Kruetten and Moritz von Grotthuss presented its “c2” resealable end, a new mechanism that replaces the standard stay-on tab opening of beverage cans with a simple mechanism that is easier to open and can be repeatedly sealed – a feature present on plastic bottles and other types of beverage containers but that is not yet well solved for cans.

Since the 60s, many inventors have attempted to solve the riddle of the resealable can, but even the most-promising solutions were too technically complex or not economically viable to integrate into the internationally-standardized filling processes. The last significant change to the soda can, in fact, was the stay-on tab, launched in 1974. It replaced the ring-pull and reduced litter and the risk of injury. Now, some 40 years later, there is a solution that further evolves the can and meets the needs of today’s market.

can2close's patent-pending solution offers a number of advantages for the consumer, including the ability to portion canned beverages and easily transport them after the first opening. The resealable end also keeps drinks fresher, prohibits unwanted contaminants (e.g. wasps, cigarettes, drugs, etc.) and reduces the risk of spilling. The plastic mechanism can be opened with one hand and is fingernail friendly, while the larger opening releases more aroma and flavor (especially important for beer) and is usable with a straw. The solution offers beverage brands a new innovation and a great branding possibility, as the shape and color of the closure components are customizable. can2close also states that filling companies can easily integrate the resealable end into established filling processes.