Rendac Son (part of VION Ingredients) and the Dutch water technology company Paques have agreed on the construction of an innovative new wastewater treatment plant that will produce green energy.

Rendac Son collects and processes all animal residual material (such as animal carcasses and slaughterhouse waste) of the Netherlands. In the factory in Son (in the southern part of the Netherlands), the major part of the animal waste is converted into biofuel, mainly used by power plants. This process produces a large amount of waste water which now is treated in a conventional waste water treatment plant. This takes a relatively large amount of energy. 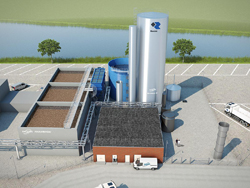 In the new plant, anaerobic treatment (which converts organic wastes into biogas) will be combined with the ANAMMOX® process (in which nitrogen is efficiently removed). In a combined heat and power plant (CHP), the produced biogas will be converted into both electricity and heat. The amount of electricity produced and the savings compared to the current WWTP is an equivalent of the energy consumption of approximately 3,000 households.

"Within VION Ingredients, innovation and sustainability of existing processes are important issues, and therefore anaerobic treatment is not unknown to us. However, the nitrogen in the wastewater was a bottleneck for successful application of this treatment in the Rendac process. It is very difficult to remove nitrogen with traditional processes. The ANAMMOX® process has proven itself over the last decade. In cooperation with Paques, the feasibility of the combination of these techniques in our specific case was shown.” said Roel van den Borne, project leader on behalf of VION Ingredients. "In our industry we are the first company to realize such a combination of technologies. The new installation will also be used for the waste water of the existing energy park Ecoson and is suitable for processing the wastewater from the future bio-phosphate project. This project contributes to the further optimization and sustainability of the energy consumption of Rendac as well as of the adjacent Ecoson. Also, the new facility enables a yearly reduction of 1,600 ton in CO2 emissions."

The future wastewater treatment plant has, according to the common standards for this type of effluent, a very small footprint. The biogas produced is biologically desulfurized with the THIOPAQ® process.

"A great project" says Emil Sandstra of Paques: "This shows the strength and especially the synergy of these three biological systems. Besides that, this ANAMMOX® reactor will be the largest of its kind in Europe."

Orange processing expected to step up in Brazil this month