Restructuring At The Corvaglia Group

With annual revenues of approximately CHF 50 million, 2 branches and some 230 staff, the Corvaglia Group has grown substantially over…

With annual revenues of approximately CHF 50 million, 2 branches and some 230 staff, the Corvaglia Group has grown substantially over the last few years. In order to meet increasingly challenging requirements and to accommodate both market-specific and internal developments, founder and proprietor Romeo Corvaglia began streamlining in-house structures in the summer of 2011. This restructuring and remodelling process has now been completed.

Management Changes
Thomas Marder (48, Dipl. Ing. FH), who has held a seat on Corvaglia Holding’s board of directors since 2009, took on overall responsibility for the Corvaglia Group as CEO on 1 July 2011. With a successful track record of managing several international technology companies employing up to 1,100 staff, he has considerable experience of designing effective and efficient processes. This area of responsibility was previously covered by Romeo Corvaglia (52, founder, proprietor and Chairman of the Board of Directors), who will gradually be stepping back from operational matters; as chairman of the board he will be
devoting himself to strategically important projects, to which he brings a wealth of knowledge and technical expertise. The Technology department will now be managed by Michael Krueger (33, Dr rer nat) as CTO. Roger Müller (49, former CTO) left the firm with effect from April 2012.

New Areas Of Responsibility
Peter Kistler (44, Eidg. Dipl. Techn. Kaufmann) is heading up the newly created “Process Improvement” unit. He and his team will analyse internal processes in an ongoing effort to integrate operations and refine workflow. The first steps have already been successfully implemented, increasing output and efficiency.

In addition to his duties as the Corvaglia Group’s Chief Sales Officer, Peter Schkoda (45, Dr Ing) has taken over the management of Corvaglia Closures Eschlikon AG.

An Optimistic Eye To The Future
The roles and responsibilities of the other board members remain unchanged: As CFO, Simon Weisser is responsible for financial and personnel matters and Bernardo Osés, the General Manager, is charged with leading Corvaglia Closures Ixtlahuaca in Mexico. Corvaglia expects these structural adjustments to produce qualitative and quantitative growth in the long term and is convinced that the firm is well positioned to face future challenges. 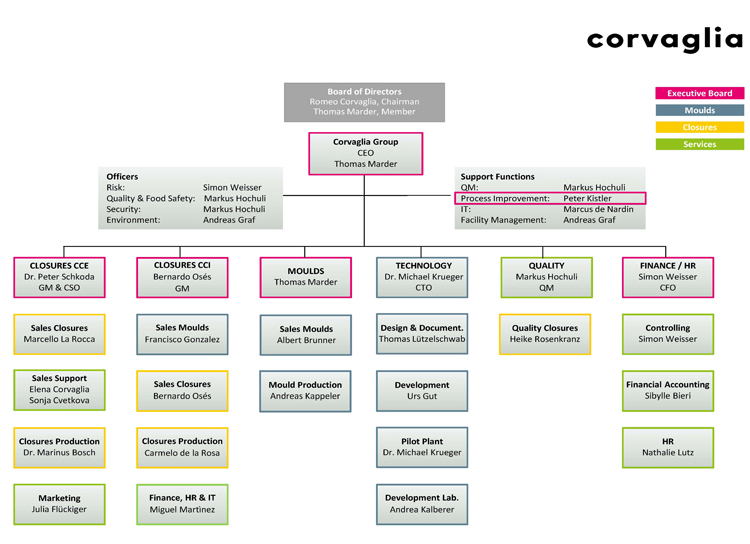