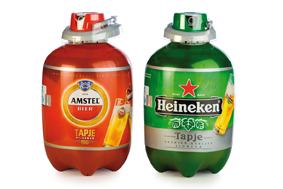 International beer brands Heineken and Amstel have been launched in a new four litre PET keg with an integral tap supplied by APPE.  The new “Tapje” keg is a small draft-beer system, which consumers can use at home.  It offers an innovative cost-effective alternative to the traditional crate of beer, with greater flexibility for consumers. It has been launched in the Netherlands prior to introduction into other markets.

The Tapje features APPE’s proprietary monoBLOXTM barrier technology with oxygen scavengers, resulting in a robust container with superior barrier performance that protects the integrity of the beer by keeping out oxygen whilst keeping in the carbonation.

Once open the beer remains fresh for 30 days and so is ideal for occasional drinking or for parties. The Tapje is ready for use after being cooled for ten hours in a refrigerator. A separate beer cooler is available which reduces this time to an hour. A coloured indicator on the front of the keg shows when the beer has reached the correct temperature for consumption.