Fruit 4 London are one of London’s leading fruit delivery services, they provide… 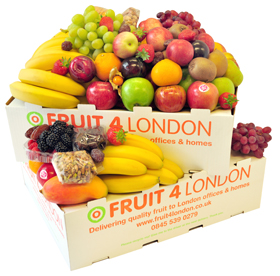 Fruit 4 London are one of London’s leading fruit delivery services, they provide fruit boxes and gift baskets to offices and homes throughout the whole of the Capital. But where did it all begin?

The owners of fruit 4 London Gabor Doroghazi and Laszlo Mulatow were originally from Hungary, they’re friendship stemmed back several years as they were both on the same cycling team as road racers.

In the year 1998, when Lazlo turned 21 he moved to the UK and became a greengrocer based in Central London, meanwhile Gabor stayed in Hungary to finish his studies at Szent Istvan University, leading to him eventually becoming an Agricultural Economist.

One year later Gabor came to England with the hope of starting his own business, initially he wanted to open up a bike shop as it was something that had interested him from a young age. He went out and found a job as a mechanic in a bike shop, and while he was doing this he took on a job at a greengrocers in order to help him start saving for a shop of his own.

In June 2008 Laszlo and Gabor met up in London. After several long chats they came to the decision they would set up a fruit delivery business, allowing people to order what they need and have it all delivered to their door.

With Laszlo having more than 7 years experience in the fruit and vegetable business, and Gabor’s extensive knowledge of London roads after his fruit delivery job. They decided to take the skills they had learnt and start a fruit delivery service that operated throughout London. As their budget was limited and they couldn’t afford to buy a shop, they decided to come up with a different and original way of distributing there produce and attracting customers. The keyword was ONLINE!

In a matter of weeks the company was established and on the 1st of August 2008 they went online with the new website www.fruit4london.co.uk

Initially their focus was on supplying offices, as home deliveries seemed to be more complicated. They bought all the required elements to get them started: a van, a fridge, and rented a small warehouse in North London far away from the city.

The first year was an uphill struggle, trying to balance working full time and trying to nurture their newborn business was a big strain. After a year in business things were looking up, but then the North London warehouse complex burned down! It was a sign that the business needed to change.

To improve the service they had to find a better and closer location to the fruit market and to the city of London. Eventually they were doing deliveries with two fully packed vans and had more and more customers hungry for their fruit!

Today, Fruit 4 London has five employees, and has had to buy more vans in order to reach more customers. They are about to take a new direction and start their home deliveries, alongside this comes a new and improved website hosting a wide array of fruit and vegetables.