PepsiCo Signs With Alokozay As Exclusive Bottling Partner For Afghanistan

PepsiCo signed an Exclusive Bottling Appointment (EBA) with the… 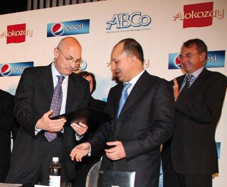 PepsiCo signed an Exclusive Bottling Appointment (EBA) with the Alokozay Group of Companies to manufacture and distribute a broad range of PepsiCo beverages in Afghanistan. The beverages will be produced at ABCO (Alokozay Beverages Company), Alokozay’s beverage bottling plant, which will be set up in Kabul with an initial investment of US$ 60 million.

The Alokozay Group, a consumer goods distribution and marketing company headquartered in Dubai, already has a strong presence in Afghanistan in the FMCG category. As part of the EBA, the plant will not only manufacture and distribute famous PepsiCo brands such as Pepsi Cola, Diet Pepsi, 7-UP, Mirinda and Mountain Dew, but will also enter the significant categories of energy drinks and bottled water by introducing PepsiCo brands such as Sting and Aquafina.

It is expected that the new plant will come into operation in March 2012. The plant will contribute significantly to the local economy, by creating direct and indirect employment for 3,000 people, including 800 direct jobs. The EBA was signed by Abdul Rehman Alokozay, Chairman, Alokozay Group of Companies, and presented to Mr. Saad Abdul-Latif, CEO for PepsiCo Asia, Middle East and Africa at a ceremony held at the Armani Hotel, Burj Khalifa, Dubai.