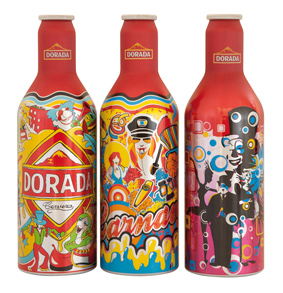 Dorada is the Official Beer of the Tenerife Capital International Festival. The beer company will carry out the first initiative of this kind on the Canary Islands, focused on the distribution of 250,000 aluminium bottles to be decorated with different motifs representing the essence of carnival.

A total of three different aluminium bottles on which the essence of carnival will appear, have been developed in cooperation between CCC marketing teams and Boxal print specialists. One of them, called "Charlot," shows the figure of the mythic Spanish character surrounded by retro motifs, taking the consumer back to the 70s. A second label, "Carnaval," places an accent on the carnival celebration in and of itself and reviews the different characters who have participated in it. The third option, nicknamed "Yellow Submarine," highlights the traditional Dorada label in which different illustrations with carnival motifs are included.

All bottles have been printed by Boxal in High Definition offset for optimal visual rendering and impact.

Sidel launches its 1SKIN™ bottle, the future of sustainable packaging for sensitive drinks