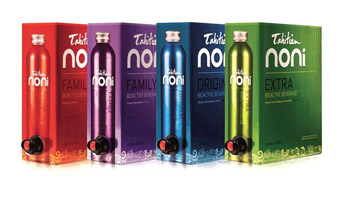 Tahitian Noni International (TNI) has been named as a First Place Winner of the prestigious Mobius Award for its new packaging designs. The award was given for both the new Tahitian Noni® Bioactive Beverage bottles, as well as the unique 4-liter Quad fridge dispenser. This year’s winners in Package Design in the Food and Beverage category include Coca Cola, Absolut Vodka, and Tahitian Noni International. The Mobius Awards acknowledges creative excellence worldwide.

Judges are asked to select winners based on the entry’s effectiveness and creativity. This means there can be multiple First Place winners. A First Place Mobius Award is the highest commendation in this well-known competition. The Mobius Award exemplifies the height of achievement in international advertising. To receive the Mobius Award is to be honored by one's peers as highly successful in transforming an advertising concept into a singularly unique achievement that proclaims leadership in the advertising industry. In the past, fewer than 5 % of the competition's total entries receive this prestigious recognition.

Sidel launches its 1SKIN™ bottle, the future of sustainable packaging for sensitive drinks