A diet rich in the plant compound luteolin reduces age-related inflammation in the brain and related memory deficits by directly inhibiting the release of inflammatory molecules in the brain, researchers report.
Luteolin (LOOT-ee-oh-lin) is found in many plants, including carrots, peppers, celery, olive oil, peppermint, rosemary and chamomile. The new study, which examined the effects of dietary luteolin in a mouse model of aging, appears in the Journal of Nutrition.
The researchers focused on microglial cells, specialized immune cells that reside in the brain and spinal cord. Infections stimulate microglia to produce signaling molecules, called cytokines, which spur a cascade of chemical changes in the brain. Some of these signaling molecules, the inflammatory cytokines, induce "sickness behavior": the sleepiness, loss of appetite, memory deficits and depressive behaviors that often accompany illness. 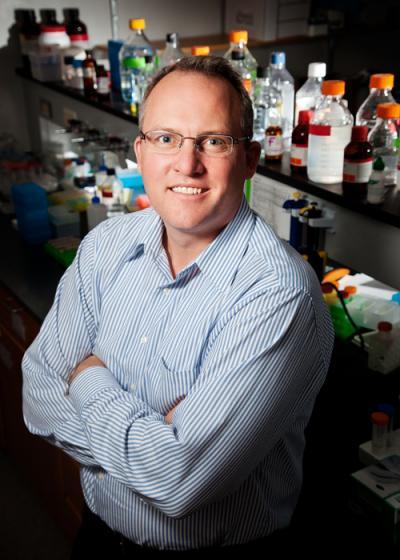 Inflammation in the brain also appears to be a key contributor to age-related memory problems, said Professor Rodney Johnson, who led the new study. "We found previously that during normal aging, microglial cells become dysregulated and begin producing excessive levels of inflammatory cytokines," he said. "We think this contributes to cognitive aging and is a predisposing factor for the development of neurodegenerative diseases."
Johnson has spent nearly a decade studying the anti-inflammatory properties of nutrients and various bioactive plant compounds, including luteolin. Previous studies – by Johnson's lab and others – have shown that luteolin has anti-inflammatory effects in the body. This is the first study to suggest, however, that luteolin improves cognitive health by acting directly on the microglial cells to reduce their production of inflammatory cytokines in the brain.
The researchers showed that microglial cells that were exposed to a bacterial toxin produced inflammatory cytokines that could kill neurons. When the microglia were exposed to luteolin before they encountered the toxin, however, the neurons lived. "The neurons survived because the luteolin inhibited the production of neurotoxic inflammatory mediators," Johnson said. Exposing only the neurons to luteolin before the experiment had no effect on their survival, the researchers found. "This demonstrated that luteolin isn't protecting the neurons directly," he said. "It's doing it by affecting the microglial cells."
The researchers next turned their attention to the effects of luteolin on the brains and behavior of adult (3- to 6-month-old) and aged (2-year-old) mice. The mice were fed a control diet or a luteolin-supplemented diet for four weeks. The researchers assessed their spatial memory and measured levels of inflammatory markers in the hippocampus, a brain region that is important to memory and spatial awareness.
Normally, aged mice have higher levels of inflammatory molecules in the hippocampus and are more impaired on memory tests than younger adult mice. Aged mice on the luteolin-supplemented diet, however, did better on the learning and memory task than their peers, and the levels of inflammatory cytokines in their brains were more like those of the younger adult mice.
"When we provided the old mice luteolin in the diet it reduced inflammation in the brain and at the same time restored working memory to what was seen in young cohorts," Johnson said. Studies have shown that plant compounds such as luteolin can get into the brain, Johnson said. "We believe dietary luteolin accesses the brain and inhibits or reduces activation of microglial cells and the inflammatory cytokines they produce. This anti-inflammatory effect is likely the mechanism which allows their working memory to be restored to what it was at an earlier age." "These data suggest that consuming a healthy diet has the potential to reduce age-associated inflammation in the brain, which can result in better cognitive health," he said.
Source: University of Illinois at Urbana-Champaign

The Beverage carton industry calls for a 90 % mandatory collection target

New clinical evidences confirm: Quercetin Phytosome® is a natural help for an optimised recovery from covid-19