According to a new report from Beverage Insight specialists Canadean, the flavour dynamics of the juice, nectar, still drinks and iced tea markets are evolving rapidly as tastes shift from the traditional mainstay of orange to a more… 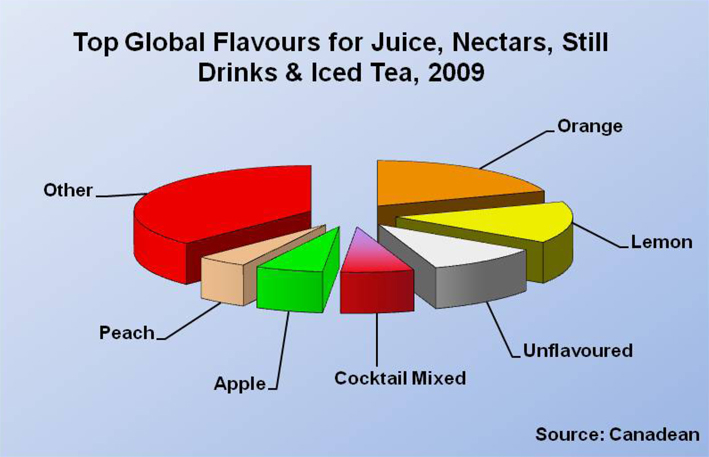 According to a new report from Beverage Insight specialists Canadean, the flavour dynamics of the juice, nectar, still drinks and iced tea markets are evolving rapidly as tastes shift from the traditional mainstay of orange to a more diverse and interesting range of blends and ‘other flavours’. High orange juice concentrate prices and the financial downturn have accelerated this process as operators look to a plethora of mixed fruit combinations of two or three different flavours that offer more economical options. The new ‘Flavour Trends in Juice and Iced Tea Drinks’ report shows that the share of orange has dropped to less than one in every five litres sold of juice, juice drinks and iced teas; just five years ago this figure was between 23 and 24 %. The abundance of fresh fruit vended on the street in much of Asia, Africa, the Middle East and Latin America has resulted in a bias towards juice and juice drink sales in the more developed parts of the world like West Europe and North America. With many of these markets showing the symptoms of maturing, it has been necessary for operators to offer a more varied assortment of flavours to maintain consumer interest in their products and to add value. This has contributed to the erosion of orange’s share and widened the representation of ‘other flavours’ and cocktail fruit mixes and blends on the market.
New flavour innovation is not just aimed at reducing costs during times of high concentrate prices or developing new taste concepts, but also has a critical role of adding value. Adding value in mature markets is important and one example has been the development of the so called ‘superfruit’ segment. Flavours like acai, blueberry and pomegranate have been positioned as a source of natural enhancement without the addition of vitamins and minerals artificially.
Orange may be waning but the second most popular global flavour, lemon, is very much on the up. This can be accredited to lemon’s popularity as an iced tea in Asia and lemon’s success as an unpackaged still drink in India. The phenomenal rise of Limonata in Turkey and the popularity of lemon flavoured sweetened waters in Poland and other East European markets have been contributing factors. The pioneering work of Nongfushanquan in China in producing new vitamin variants of lemon still drinks in the fast rising Chinese market has further boosted lemon share. The sheer size of the Asian iced tea market is borne out by the fact that unflavoured, mainly green tea based products that make up almost 90 % of volumes in the region, help this flavour grouping to third place with 10 % of global sales.
Canadean’s report tracks the trends in flavour innovation and helps to highlight why although in the short term orange will not be deposed as the leading flavour, stakeholders in the fruit drinks industry will be less vulnerable to big hikes in orange juice concentrate prices. New flavour options provide immunity from such rises and make the industry less reliant on the once core orange flavour.

Firmenich announces dragon fruit as 2023 flavour of the year