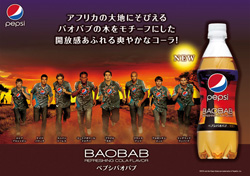 Pepsi Baobab follows in the manner of previous unique seasonal cola products such as Pepsi Ice Cucumber in 2008 and Pepsi Shiso in 2009. The product’s bottle states the drink as “a refreshing cola bursting with openness, made in the motif of the Baobab tree towering over the African land.”

The flavored drink has a light brown color similar to bark of the baobab tree, and has a lighter, but spicier taste than other Pepsis sold in Japan. The beverage is also stronger in carbonation.

It comes in a clear plastic bottle with an African theme, as pictured to the left.

While not yet explicitly stated, Pepsi Japan seems to be hoping to use the popularity of this year’s World Cup in South Africa to help promote the product. Beyond the overall African motif, the Pepsi Baobab individual website currently features eight renowned soccer players from countries around the world.

Pepsi Baobob is being sold for an unspecified limited time throughout Japan in 500ml bottles, with a suggested retail price of 140 yen.

Promising results in fight against dyslipidemia