Dr.-Ing. E. h. Hermann Kronseder died in his own home near Regensburg on 9 July 2010. He was 85 years old. The founding father of Krones AG was frequently, almost up to the very end, to be found at the group’s headquarters in Neutraubling… 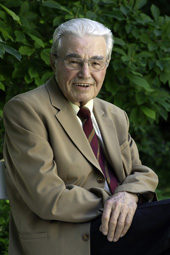 Dr.-Ing. E. h. Hermann Kronseder died in his own home near Regensburg on 9 July 2010. He was 85 years old. The founding father of Krones AG was frequently, almost up to the very end, to be found at the group’s headquarters in Neutraubling.

Hermann Kronseder came from a family of craftsmen in the Upper Palatinate. The son of a blacksmith, he served an apprenticeship in the late 1930s as an aircraft production mechanic at the Messerschmitt company in Regensburg after which he was drafted into the military and finished up in a prisoner-of-war camp. These gruelling times reinforced his determination to learn more and be master of his own fate. In the late 1940s, he qualified in Regensburg as a master machinist and then as a master electrician as well. In 1951, at the age of 27, under less-than-easy conditions, he set up his own company in Neutraubling, a “craft enterprise for making electrically powered machines”. In a workshop he built with his own hands, really what today we would tend to call a shed, he was soon producing semi-automatic labellers, from drawings he himself had created on his kitchen table at home. The first semi-automatic machine was rated at what was then the proud speed of 1,500 labelled bottles an hour.

Nowadays, fully automatic labelling machines achieve speeds of up to 72,000 bottles an hour, and in certain cases significantly more.

In the 1960s, Krones’ turnover doubled every three years on average, and export business acquired increasing momentum. In the 1970s, additional plants were built in the Upper Palatinate and the firm began to produce bottle fillers. Even back then Hermann Kronseder, a passionate pipe-smoker and hunter, was already creating the first monobloc concepts, thus achieving close mechanical concatenation of the filler, the closer and the labeller, for the times a truly path-breaking achievement.

Converted into a stock corporation in 1980, and quoted on the stock exchange since 1984, Krones purposefully extended its product portfolio to include all the other machines involved in filling and packaging lines. The resultant complete-line business was systematically expanded. Process and material flow technologies were integrated as well. Today, Krones operates as a single-source vendor, whose product range even includes the construction of entire breweries and beverage plants. The clients concerned are not only breweries and beverage producers, but also companies from the food, chemical, cosmetic and pharmaceutical sectors.

In 1996, Hermann Kronseder moved to Krones’ supervisory board as Chairman. Volker Kronseder was appointed Chairman of the Executive Board. In 1997, Hermann Kronseder stepped down from this post for health reasons. He saw himself anyway as more of an inventor than an entrepreneur, as he describes so vividly in his autobiography “My Life”, which has been translated into five languages. His 630 personal patents bear eloquent witness to this. The technological leadership enjoyed by the company he founded, which over the years has evolved into the world’s market leader in the packaging machinery sector, is evidenced by more than 1,600 registered full and utility patents.

Hermann Kronseder, acknowledged in his chosen sector as the “powerhouse of beverage machinery design”, has received many, many accolades. Besides prestigious Bavarian honours, he was awarded the Federal Order of Merit 1st Class and the Diesel Medal in Gold from the German Institute of Inventions. This accolade, the one that he himself treasured the most, put him on a pedestal with Ludwig Bölkow, Wernher von Braun and Konrad Zuse. In1993, the Weihenstephan Faculty at Munich’s University of Applied Science awarded him an honorary doctorate, in special recognition of his interdisciplinary thinking. In the same year, he was awarded the freedom of Nittenau, an honour also bestowed by the town of Neutraubling in 2004.

With Volker Kronseder as Chairman of the Executive Board and his fellow-directors, consolidated turnover has risen from around 834 million euros in 1996 to more than 2 billion euros, of which export orders account for over 80 %. As the reins passed from one generation to the next, the group, which today employs more than 10,000 people, almost 8,200 of them in Germany, acquired efficient structures that are assuring Krones of its acknowledged leadership in its chosen sector.

A good 54 per cent of Krones AG’s stock is owned by the Kronseder family. Hermann Kronseder had transferred the majority holding to his sons back in the 1980s.