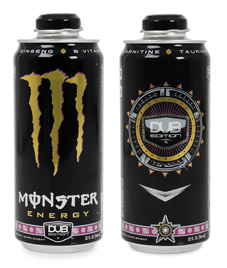 According to Kovacs, the marketing mastermind behind DUB Publishing, producer of DUB® Magazine – a custom car culture magazine – and the Monster Energy DUB Show Tour, the world's largest custom auto show and concert tour, the two brands created the drink to reach the African-American and Latino demographic, mostly males 18-34. DUB approached Monster about the partnership because no other energy drink company had captured this particular consumer.

Like all aluminum cans, the Jumbo Cap Can is lightweight, portable, unbreakable, quick to chill and 100 percent recyclable. It also adds the benefit of resealability, however, and features a unique "pop and smoke" effect when opened.
Ball is the only company to offer the 32-oz. and 750 mL Jumbo Cap Cans, which are the latest additions to its other resealable can offerings – the Alumi-Tek® bottle and the Ball Resealable End (BRE). The company has been the only can maker producing 32-oz. and 750 mL cans for many years. They were mostly used for beer, until Monster Energy adopted the 32-oz. can for its Monster "BFC."

Monster Energy worked with Ball's graphics department in Broomfield, Colo., to set the color and graphic tolerances for perfect reproduction of the Monster Energy Dub Edition graphics and logo on the aluminum cans. Ball has a company-owned, integrated graphic art and printing plate operation, complete with a recently improved manufacturing pilot line, to set these standards confidentially with customers before commercial production.

The Beverage carton industry calls for a 90 % mandatory collection target

New clinical evidences confirm: Quercetin Phytosome® is a natural help for an optimised recovery from covid-19